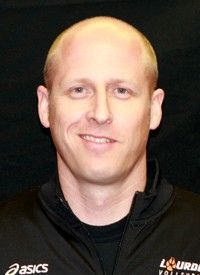 Reitz enters 2013, his fourth at the helm of the women’s team, with a 47-56 record at Lourdes and 67-91 in five seasons overall as a collegiate head women’s coach. He also enters his third season guiding the men’s team with a 31-21 record both overall and at Lourdes.
The 2012 Mid-America Men’s Volleyball Intercollegiate Conference (MAMVIC) East Coach of the Year, Reitz has had eight All-MAMVIC East selections, including three First Team, one Second Team, and four Honorable Mention picks during the men’s program’s first two seasons. He also had one woman earn Honorable Mention All Wolverine-Hoosier Athletic Conference (WHAC) in 2011 and two more earn the accolade in 2012. In 2012 Reitz also had two women named to the WHAC All-Freshman Team as well as one player earn the program’s first Player of the Week honor.

Student-athletes have excelled in the classroom as well during Reitz’s stint at Lourdes, as three men have been named to the MAMVIC East All-Academic Team while seven women were named to the WHAC All-Academic Team. In 2012, one of Reitz’s women was named to the CoSIDA Academic All-District I First Team and another earned NAIA Scholar-Athlete honors.

Reitz arrived at Lourdes after spending five seasons as the associate head women’s coach at The University of Toledo. While with the Rockets, he helped the team earn a pair of semifinal appearances in the Mid-American Conference in addition to a program best 18 victories in 2005. Toledo had a pair of Academic All-American recipients during his tenure at the school as well.

Prior to Toledo, Reitz spent the 2002 and 2003 seasons as an assistant at the University of Texas-El Paso after two seasons as the head coach at Saint Joseph’s College in Indiana. He began his collegiate coaching career at Toledo in 1999 as a graduate assistant.

An outstanding player during his collegiate days, Reitz played two seasons at Golden West College where he led the team to the 1995 state championship in California. He was named the state’s Most Valuable Player and earned All-Orange Empire Conference accolades during his stay with the Rustlers. Reitz then transferred to Long Beach State University where he played his final two collegiate seasons.

Reitz went on to play beach volleyball in both the Association of Volleyball Professionals as well as the Midwest Professional Volleyball Association. He has also earned several medals as a player at the USA Volleyball Open Nationals over the past 12 years. Reitz has since traveled to Russia and Ukraine as part of the Athletes in Action international volleyball team.

A 1997 graduate of Long Beach State with a bachelor’s degree in kinesiology, Reitz earned his master’s degree in exercise science from Toledo in 2000.