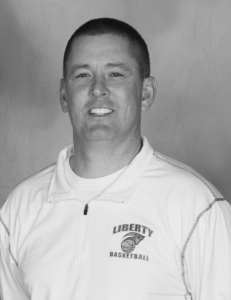 Originally from Fremont, Ohio, Coach Nossaman was a three-sport athlete in Basketball, Baseball and Cross Country at Fremont Ross High School. In his College Basketball career, Coach Nossaman started his playing career at Siena Heights College in Adrian, Michigan then transferred to Capital University to become a student assistant coach. While at Capital, he earned a degree in education and later a Masters in education from the University of Louisiana at Monroe. In 2007, he completed Ashland University’s program in educational administration.

Coach Nossaman began his coaching career at Newark Catholic High School in 1986, and from there he was an assistant coach at Capital University for 5 years. This is his 24th season as a head coach and has posted a 343-189 career record. Go Patriots!

Liberty Basketball Graduates that have played in college: